I have always been into vintage fashion, and could spend forever pouring over images of women of every decade on Pinterest. I collect books on fashion and vintage magazines, I really geek out.

Of course I had a lot of fun dressing Luna Mulkerrins, the great female magician of 1912, as she is the star of my novel “Blythe of the Gates.” Fun as it was, I sometimes I felt really bad for what I made her wear!

The novel begins in 1911. The Edwardian look was going out–no more bustles and killer corsets and s-shaped bodies, no more Gibson Girl hair and fox furs. BUT it was not yet the free-wheeling twenties, either. The first thing Luna wears in an opening scene from the book is a hideous contrivance called a hobble skirt.

It features a band wound tightly beneath the knees so that the woman had to walk in tiny, constricted strides. Thank God this appeared to have been a short term trend.

These were often worn with boots with ten to twenty buttons that had to be opened and closed!

Things got a little easier not long after. Many drapey, empire waist dresses, featuring chiffon and beading and feathers and all kinds of pretty things, think Downton Abbey and Titanic. Luna, like many women of her time, was a seamstress and made her stage costumes along these lines, and got to use her imagination to create very lovely things. (Though she was only a magician’s assistant in the beginning, and the dress was her only form of expression–that would change soon, though!)

One thing Edwardian that did not go away was huge hats with lots of crazy trimmings. I loved writing about the hats!

So many shapes, so many trims.

When Luna started making more money from her shows, she dressed a little more haute couture.  Paul Poiret may have dressed her. Maybe in one of his lamp shade tunics over harem trousers: 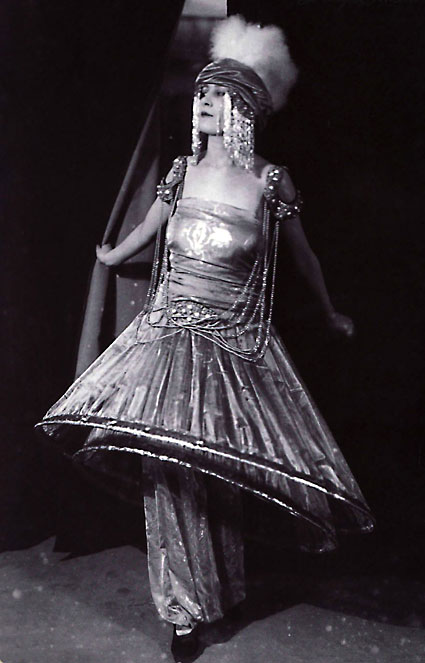 But I felt bad again when I had to dress Luna in a “bathing costume.” That was a time period where they were still pretty infantile and ridiculous looking. Sailor dresses with bloomers! Poor girl.

She couldn’t quite get hold of the new styled ones that were coming into vogue, the close fitting belted sheaths you see more in the twenties. She felt pretty stupid wearing the sailor dress which was just falling out of style for good. Things got better for her soon, though…

Anyway. I should write a sequel that takes place after the Great War to see what she wears next!